cenforce 100 mg australia Just as the pundits predicted, video is taking over the internet.  Youtube has now become the second most popular site on the internet, beating out Facebook.  And with the rise of video, science video blogs (vlogs) are taking off everywhere.  There are the big budget science vlogs by TED and Google, and popular lone wolf educational vloggers like Dianna Cowern (Physics Girl) or Derek Muller (Veritasium).  But there are still many niches to fill, and there’s always new science that needs to be shared, so there’s plenty of room for scientists to meaningfully add their own footage to the online world.

Last week, I had a chance to observe and participate in the birth of a new science vlog called “Cool Worlds” created by astronomer David Kipping, an assistant professor at Columbia University.  For years, I’ve been encouraging scientists who have an interest in outreach to make their own videos.  David is doing exactly what I pictured: using the medium of video to explain his own latest papers and relevant work of his colleagues.  Cool Worlds may not be as jazzy as educational vlogs, nor as technical as a professional conference. But it offers casual viewers a chance to hear about cutting edge research from the people who are doing the research–and that’s something that will always be fresh. 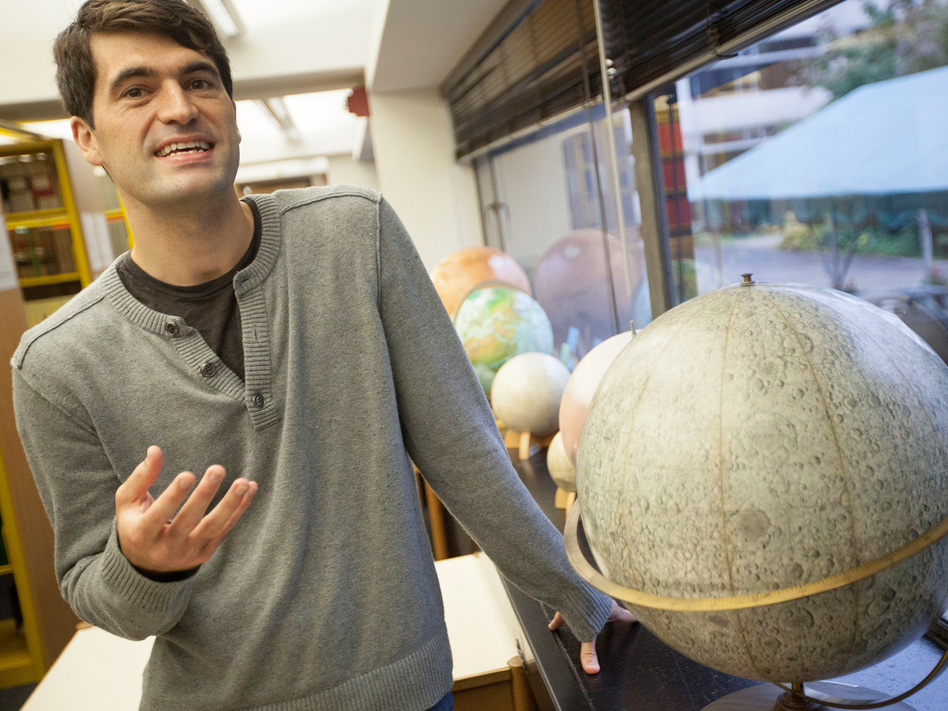 Prof. David Kipping studies planets around other stars. He films and edits the Cool Worlds science vlog in his office at Columbia University.

David got the camera that he uses for Cool Worlds as a Christmas present.

He started by using a standard 18-55 mm zoom lens (there’s often a lens like this included with the camera), and found that his videos were coming out too dark.  So he bought the new lens, which collects a lot of light so there’s no need for specialized lighting.  It also makes the background “nice and soft” but keeps the person in focus.

David edits the video using the iMovie software that comes for free on a Mac laptop. The camera records the audio iself through its mic-in port, so there’s no extra work to do to sync up the audio and video.  The videos play for about 3-6 minutes, and it takes David about 2-3 hours to make each video.  He’s been putting out roughly one each week for for the last two months.

David started his vlog because he spotted an opportunity to connect with a vast audience. “I noticed that the vlog format is very successful on YouTube.  Like I’ll see a series of videos online, like reviews of TV shows like Game of Thrones, and they’ll get a million views.  I hadn’t really seen too many astronomy outreach talks done in a vlog format.”

It’s important to have a good microphone! This Rode mic sits on David’s bookshelf.

Cool Worlds may not yet have reached as big an audience as these Game of Thrones videos, but already, a Cool Worlds video about a cloaking device for extrasolar planets featuring Alex Teachey has had almost 20,000 views.  That’s a lot of fun. “There have also been lots of comments about the video,” David said.  “We filmed a Q. and A. video just to respond to all the comments. There have been some strange comments on there, but most have been genuine questions that we’ve enjoyed replying to.”

David had me sit in his desk chair and talk about one of my science projects, as his camera silently recorded me.  I stammered and sputtered a bit.  But after about 20 minutes of improvising, there was plenty of material for him to edit into this mini-masterpiece here.  “You don’t even need to spend a lot of time making artist impressions or animations.” says David.

So far the Cool Worlds vlog is mostly one scientist with a camera, a low budget–and a lot of guts.   But take a peek; I bet you’ll be inspired. And as David says, “if you can inspire a few people to become astronomers–that’s incredibly worthwhile.”